Home > Understanding > What is a Hemorrhagic Stroke?

What is a Hemorrhagic Stroke? 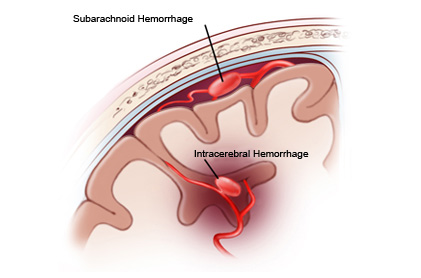 A hemorrhagic stroke is either a ruptured brain aneurysm or a weakened blood vessel leak that suddenly interferes with the brain’s function. Blood spills into or around the brain and creates swelling and pressure, damaging cells and brain tissue. Hemorrhagic strokes account for about 15% of all strokes, and are divided into categories depending on the site and cause of the bleeding.  There are two types of hemorrhagic stroke: Intracerebral and Subarachnoid.

In rare cases, intracerebral hemorrhage may occur because of a leaking arteriovenous malformation (AVM), which is an abnormal and weak-walled blood vessel that connects an artery and a vein.  This week blood vessel is present from birth and is larger than a capillary so blood that flows in can be at a high pressure, eventually causing the AVM to stretch or leak.

Symptoms of an intracerebral hemorrhage almost always occur when the person is awake.  They tend to appear without warning, but can also develop gradually.  The symptoms worsen over a period of 30 to 90 minutes and can include:

People who have a first-degree relative who had a subarachnoid hemorrhage have a higher risk of developing one themselves. Other risk factors include smoking, heavy alcohol use and hypertension (high blood pressure).

Subarachnoid hemorrhages make up about 15% of all strokes, resulting in nearly one quarter of all deaths (approximately 120,000) caused by or related to strokes. Middle aged individuals and females are more likely to be affected.

Between 70-85% of subarachnoid hemorrhage cases are caused by a ruptured cerebral aneurysm. These cases tend to occur in the Circle of Willis and its branches – a circle of arteries that supply blood to the brain.

Prior to rupture, an aneurysm usually causes no symptoms unless it presses on a nerve or leaks small amounts of blood.  It is then that warning signs will occur such as:

About 35% of people who reach the hospital alive die soon after. Among those who survivor a bleeding aneurysm, about 50% suffer long-term neurological problems.  People who bleed from an aneurysm or AVM and do not have this problem treated are at risk for having a repeat bleed.  If the blood vessel is not repaired of removed, one out of five survivors of subarachnoid hemorrhage have bleeding again within 14 days.  50% who do not have surgical treatment will have a repeat bleed within 6 months.