HOW IS OCCLUSION AND BYPASS PERFORMED? 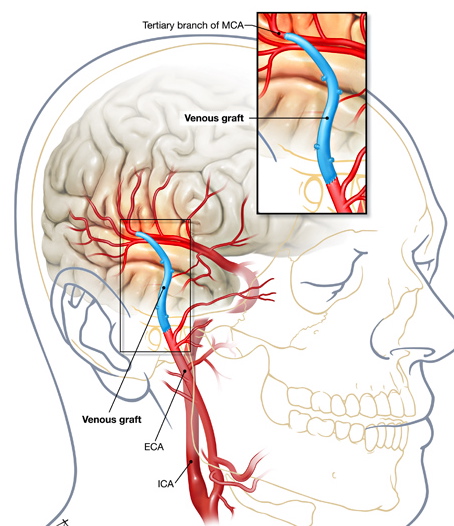 Bypass, the first part of the procedure, is an open microsurgical technique performed to use blood vessels as mediums to flow blood from one part of the brain into another. A previously identified donor vessel is separated from one end of its normal location and rerouted into the brain at a position beyond the aneurysm. The donor vessel is then reconnected to the parent vessel to ensure that blood continues to flow to the part of the brain that needs to receive it.

After the blood vessel has been bypassed, the next step is to occlude (close) the diseased portion of the blood vessel containing the aneurysm using an endovascular technique called coiling. To close down the diseased vessel, coils are inserted into the vessel until it is completely filled. These coils will permanently remain inside the brain.

REASONS FOR HAVING ARTERY OCCLUSION AND BYPASS

Artery occlusion and bypass is often used to treat aneurysms that cannot be closed with standard methods.

Blood carries nutrients and oxygen to the brain through four main arteries: the right and left carotid arteries and the right and left vertebral arteries. Poor delivery of blood flow reduces the brain’s ability to function. Called cerebrovascular insufficiency, a lack of blood supply leads to transient ischemic attacks (TIA), stroke, and ultimately brain cell death. In a cerebral artery bypass, the surgeon reroutes blood flow around a blocked or damaged artery to improve or restore blood flow to an ischemic (oxygen-deprived) area of the brain. A cerebral bypass can be performed in a variety of ways depending on where the blockage has occurred, the underlying condition being treated, and the size of the brain area to be revascularized. In general, there are two types of bypasses:

The first type uses a vessel graft – a length of artery or vein harvested from somewhere else in the body. The graft is connected above and below the blocked artery so that blood flow is bypassed (rerouted) through the graft. Common vessels used as a graft are the saphenous vein in the leg or the radial or ulnar arteries in the arm. A separate incision is required to harvest the graft. Next, one end of the graft is connected to the external carotid artery (ECA) in the neck and then tunneled under the skin in front of the ear to the scalp. A hole is cut in the skull through which the graft is passed and connected to an artery in the brain. This method is typically used when a large (high-flow) artery is affected or needs to be sacrificed to treat the aneurysm.

The other type does not use a vessel graft but a healthy donor artery that flows in the scalp or face. The donor artery is detached from its normal position on one end, redirected to the inside of the skull, and connected to an artery on the surface of the brain. The scalp artery now supplies blood to the brain and bypasses the blocked or damaged vessel. This method is typically used when a smaller (low-flow) artery has narrowed and is not capable of delivering enough blood to the brain.

WHO IS A CANDIDATE?

You may be a candidate for a cerebral bypass if you have:

Cerebral bypass may be helpful in restoring blood flow and reducing the risk of stroke in conditions such as: